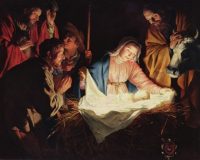 Let [us] give thanks to the Lord for His lovingkindness, and for His wonders to the sons of men! Psalm 107:8

Most are thinking toward Christmas—family, the gifts, and the dinner. We might contemplate the dinner and family togetherness just completed, Thanksgiving!

As we gather with family once again, we cannot help but spend time in memory; contemplating days gone by. One of the great things about our past (and the present) is to be part of a people that gather together in the local church to celebrate the time of Christ’s birth. To worship Him together. Gathering on Christmas Day is intentional; one has to plan and make room in their day to join with others in worship; to make it a priority.

A Scripture I always read in the Christmas morning worship service (we always met together on Christmas Day–people were willing to adjust their schedules accordingly) was Psalm 100.

Shout joyfully to the Lord, all the earth. Serve the Lord with gladness; Come before Him with joyful singing. Know that the Lord Himself is God; It is He who has made us, and not we ourselves;We are His people and the sheep of His pasture. Enter His gates with thanksgiving and His courts with praise. Give thanks to Him, bless His name. For the Lord is good; His lovingkindness is everlasting and His faithfulness to all generations.

Many are caught up is the secular biddings of the season, or even thinking toward change that will soon take place at the head of our government. Perhaps even Hail to the Chief plays in the subconscious rather than O Worship the King.  Interesting the focus of Psalm 100. Shouting, singing, thanksgiving, praising, blessing, loving, and faithfulness. God is very good.

Churches have gathered their people over the year. Many have spent time praying together—some are slack in doing so. Many have not only brought tithes into the store house but also gifts to honor God’s goodness. Some have participated so little in support they are embarrassed when they look at their history at tax filing time.

Many have gathered in their churches regularly. Some have attended only sporadically and considered it sufficient. Many have gathered to sing the great hymns and choruses of the church—the ones that teach theology and doctrine, and bring people to worship. Some are more interested in the beats of the drums and electric guitars that sounds like the local club or concert they attend. Those “some” are at a loss to face the realities of the world in which they live. Where are we in reaching them? We attempt to accommodate their culture styles rather than be concerned with the truth of the gospel penetrating their darkened hearts.

This year, Christmas Day is on Sunday, December 25th. Will that day find you and your family in a house of worship, worshiping and giving thanks for God’s great gift? I certainly pray that every reader of this blog will seek to take themselves and their families to a place where you can shout, sing, give thanks, praise, be a blessing, love, and show yourself faithful in a world that is bent on ignoring the lovingkindness and faithfulness of our God!

It is disturbing in our culture to drive past some church signs that declare their church will be closed for worship on the day we celebrate Christ’s birth, but never mind, the church will be open following the secular night out of celebration on New Year’s Eve. What a sad commentary on the church. I was heartened today as I returned from celebrating the life of one who passed into glory–eight church signs were already noting they would have a special day of worship on Christmas Day. Bless each one of them.

The silence was deafening. They raved all afternoon until the time of the evening sacrifice, but still there was no reply, no voice, no answer. The only sound was perhaps the sandal of Elijah as his feet scooted along the ground in his busyness before the One who was his Supreme Leader.

The false leader (god) had his chance; now Almighty God would demonstrate His power and authority.

It is interesting what Elijah does not do:

It is also interesting what Elijah does:

Leaders of government, institutions, churches, and businesses often play games to accomplish what they want. They often rely on the latest fads of color, programs, and secular appeal. However, the reliable is that which is shown dependable; and, the reliable is based on absolute truth, integrity, justice, and righteousness.

What should leaders do to develop following leaders; the latest of fads, or use the reliable truths imbedded in success God’s way?

Let us be thankful and please God by worshiping Him with holy fear and awe. For our God is a consuming fire. Hebrews 12:28-29

After Ehud, Shamgar, son of Anath rescued Israel. He killed 600 Philistines with an ox-goad. Judges 3:31

Who would name their son Shamgar? Yet, the name means “cupbearer of a surprised stranger.”

From the rustic hills of Canaan, this farmer goes forth to plow on the back forty. As he drives his oxen team from the barnyard in the early Spring morning, he may have been ready for the day, and he did not know what the One who had authority over him had in store. The day would be memorable, and deliverance would happen.

This common man follows Ehud, and is before Deborah (we will explore Ehud in a future blog). What do we know?

It seems he is a nobody, an insignificant son; perhaps even a simpleton from the hills of southwest Palestine. History makes out that he is a rude fanatic. Yet, the silence of Scripture is powerful.

He had nothing, zero, zilch. The only possessions that we can surmise is some oxen and an ox-goad (an 8-foot stick). Oh, it is apparent that he has a heart of courage, and a great confidence in his all-powerful God.

What did he do? He would have taken an 8-foot stick and whittled the end to a sharp point. We might assume he was trained to do such a thing, but we do not know; we do know he did sharpen the stick. He goes out, and we are not told that he prepared himself with other equipment, only that he had an ox-goad. Yet, he remained ready at all times to serve the Almighty God.

We can almost hear the Philistines laughing at his weapon; however, they died under his fiery zeal. Shamgar’s power resided in the arm that wielded the ox-goad, the fearless will from his heart, and the giving over of his life to the Almighty. He was a ready cupbearer for the nation of Israel. (He may have wished for a M-1 Abrams tank, but he used what was in his hand—a stick used to push and direct obstinate oxen). The opposite end of the ox-goad normally held a chiseled edge to clean the plows.

This determined man used an adequate and impromptu device to kill 600 frenzied Philistine warriors; the ox-goad was wholly sufficient.

What do we learn? It does not matter whether our name is well-known, our achievements are well-documented, or that we have all the supplies we might think we need. What matters is that we faithfully fulfill the purposes of our calling to whatever position in which we are placed. We might be called to plow corn, or we may be called upon to pulverize Philistines. We must be ready at all times.

We may not be the brightest bulb in the room; we may not have the gift of singing, or the PhD paper. However, if we are available and usable in the hands of the Almighty, He will use us to bring glory to himself.

How is your willingness, readiness, and availability working out for you?