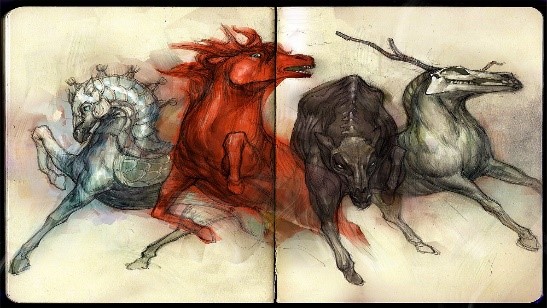 Now I watched when the Lamb opened one of the seven seals, and I heard one of the four living creatures say with a voice like thunder, “Come” –Revelation 6:1

The power-packed action of Revelation begins.

I like to read – both serious stuff and murder mysteries. At one time, I was enamored with westerns. Louis L’Amour penned over 100 Western novels; however, his suspense writing does not hold a candle to the Revelation drama; unforgettable drama, of the judgment days God brings to all the earth.

The large body of believers who will be raptured are not present. They are the Body of Christ. 1 Thessalonians 4:13-18 gives us a view of the rapture. The previous experience before the throne of God has been one of grace; judgment is coming.

Divine judgment will fall. Four thundering Apocalypse horsemen are coming. These represent conquest, military march, attack, and battle. Genghis Khan at his worst during the Middle Ages, will also not hold a candle to what is coming.

The white horse with the great deceiver in the saddle is Satan’s masterpiece. After the church raptures, he attempts to come in peace. He promises victory, making treaties with the world. In just a little over three years, there follows a red horse. The red horse is representative of bloody warfare. The quick black horse is one of famine. Then there is the pale horse of death.

By verse twelve, five seals are broken. Now the Lamb breaks the sixth seal. Blind panic erupts. Catastrophe on  world-wide scale, never experienced before is upon the earth.

To think, we have Bible teachers and preachers that have numbed their minds so dramatically, they stutter, and utter that all these earthquakes and other supernatural convulsions must be view figuratively. That verse 12-14 are just moral and political upheavals. Just a collapse of the establishments. Just symbolic.

Earthquakes, they suggest, just pictures everything in society being shaken. Sort of like today, with the onslaught of political theatre. No big deal. Then disasters to the sun, moon, and stars are the downfall of governing bodies, or, on the other hand, might be the result of our not taking care of climatic change in a godly way. Quick, get a 16-year old to give the U.N. their up comings.

The completeness of the panic causes one to contemplate of a literal application, does it not? That this is real stuff that will happen. It is hard to miss that hysterical fear will take place, worldwide!

Then the kings of the earth and the great ones and the generals and the rich and the powerful, and everyone, slave and free, hid themselves in the caves and among the rocks of the mountains, calling to the mountains and rocks, “Fall on us and hide us from the face of Him who is seated on the throne, and from the wrath of the Lamb, for the great day of their wrath has come, and who can stand?” –6:15-17

Pandemonium, everyone with their birds, cats, and dogs running for cover.

Life Application: Since all these things are thus to be dissolved, what sort of people ought we be in lives of holiness and godliness, waiting for and hastening the coming of the day of God – 2 Peter 3:11-12