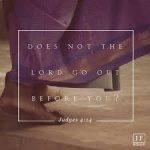 Get ready! Today the Lord will give you victory . . For the Lord is marching ahead of you. Judges 4:14

The crisis of leadership today is the mediocrity of so many men and women in power. Leadership has given way to the cult of personality; to a “gee whiz” approach to celebrities. (Leadership, James M. Burns)

Barak, a mountain-man, was reluctant and hesitant. He was the chief-in-charge of the military under Deborah. Barak waited to be inspired; otherwise he spent his time in his own frivolities (maybe some golf). Under Deborah, he was the hands, she was the brains; the heart and head of the nation.

The book of Judges exposes the need of the hour. The nation needed to be delivered from the evil devices of King Jabin of Cannan. Deborah called him to the ready, with 10,000 chosen (hand-picked) warriors of skill. But wait, there was a great disparity—Barak’s warriors faced 100,000 well-equipped warriors under the leadership of General Sisera, having twenty years of experience against Israel.

Sisera had the advantage—900 chariots (according to history having scythes fastened to their axles). These were execution machines as they would be driven through the foot-warriors. The place for battle was on the flat plain; Israel was outmanned, but God is not outfoxed.

On Barak’s side was God. Yet, Barak asked for Deborah to come with him. God’s leading, as Deborah gave the battle cry, proved catastrophic to Sisera’s warriors.

When we leaders are summoned to lead against heavy odds, we may question our competence, and often may lack the enthusiasm to face difficult choices. Moses did not want to face Pharaoh to lead God’s people out of Egypt, Gideon responded, “I am but a farm-boy; who am I to lead an army against the Midianites?” Jeremiah was not exactly thrilled to be called upon to preach.

The result for Barak is that the battle was a rout. The reason for Israel’s victory was not surprise, strategy, or superior leadership (his or Deborah’s). Victory came through God’s timing of an unseasonal, unusual torrential downpour that flooded the battlefield. The resulting quagmire of mud caused the chariots to get bogged down so that the horses could not operate, or they may have broken away. The battle ensued with 10,000 devastating 100,000.

The plans were devised by man (Israel’s Deborah and Barak) . . . the odds belong to God.

Great leaders arise from being following leaders. The wise choose a proper leader to follow. Who are you following as your leader today?

So, you see, it is impossible to please God without faith. Anyone who wants to come to Him must believe that there is a God, and that He rewards those who sincerely seek Him. Hebrews 11:6

The Five Day Bible Reading Plan
← Prev: Profiles in Leadership—Left-handed Hero—February 5, 2017 Next: Those That Serve—February 19, 2017 →