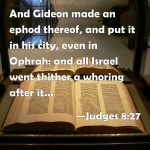 Gideon made a linen jacket and all Israel began to worship it; thus, it became an evil deed. Judges 8:24-27.

Any new venture into leadership is hazardous. Possibilities for sin emerge that previously were inaccessible, possibilities exceedingly difficult to detect, for each comes in the form of a virtue—Eugene Peterson.

Achilles, the hero of Homer’s Iliad, was a great Greek warrior. He was killed with an arrow that struck his only exposed and vulnerable spot—his heel. He left himself wide open to destruction.

Every one of us has an “Achilles Heel.” It is that spot in life that is vulnerable to downfall. The successes in Gideon’s life led him to complacency. There were no guarantees against future failure. Victory after victory produced calluses to his mind and heart.

As a leader, he began to think himself as special, having an entitlement philosophy. Interesting what leaders teach their followers.

Gideon wanted the gold, crescents, pendants, and clothing taken in battle. The people gladly consented. Just the gold would be valued today at over $70,000. Gideon makes a fantastic ephod, a “sacred” garment only to be worn by the High Priest, the exclusive agent of God.

Gideon turned down an offer to be the political leader
Gideon refused the kingship
Gideon, instead, wanted privileges of the priesthood
Gideon coveted to be God’s mouthpiece

Gideon had an Achilles Heel

Leaders can be an untrustworthy lot. There is no other position where there are so many opportunities for pride, covetousness, and lust of power. Leaders wear many disguises to keep their hearts and minds from being found out. Leaders do not like being called to be accountable or responsible. After all, they have positions that should never be questioned.

Judges 8 tells us that all of Israel went whoring (pursuance of the immoral and of depravity) after the ephod of Gideon. One following leader, Ophrah, became rich. He took many wives, had 70 sons, and a concubine. Foolishness comes with the territory of having a leader who becomes untrustworthy.

Leaders need to evaluate themselves, for the ones who follow them will repeat what they think, speak, and do.

Ease, softness, and self-pleasure birth Achilles Heels for the coming days of life. Do you have any plans to make an ephod out of your leadership position?