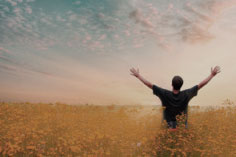 This is a reflection of an earlier scenario found in Genesis 21. The book of Genesis is especially poignant in its descriptions of the lives of people of the earth living under God’s watchful eye.

The scene is turbulent; of a family with only one son, Ishmael. Abraham’s son lived with him and Sarah for 14 years. Then it happened. Sarah became pregnant. You might want to read, again: the background of the turbulent family.

Another son for the family! Isaac was born! Sarah was perhaps as old as 90; more likely older. The son is born 25 years after God’s promise to the “young couple.” There was surely a write-up in the local Desert Times, a report from Mid-Wives-R-Us, and perhaps camel couriers broadcasting the exciting news of the “mature” woman delivering.

Thus, Isaac came into the world. A special feast was held; perhaps that is where birthday parties began. It was a time of rejoicing, and Ishmael celebrated by kicking stones with his sandals.

Three years later, as was the custom in those days, Isaac was weaned. Another celebration, as was customary, takes place. This celebration did not catch on; I do not know of greeting cards or wrapping paper that declares this kind of event. However, I am sure that Sarah celebrated.

Ishmael, the flawed teenager, utters the famous saying of the day: “O, how cute!” He probably kicked a few more stones. Ishmael the arrogant, sarcastic teenager.

Can you imagine Ishmael overhearing his history? He was the son of human planning. A handmaiden was chosen; the human effort was engaged:

It is the old, “God helps those who help themselves trick.”

When was the last time you read in Deliveries-R-Us about a 90-year-old checking into the maternity ward? Can you imagine the thoughts of Ishmael, the teenager? He moved through his days with contempt; thinking how he was going to hassle and irritate Isaac. (Might be the reason Paul mentions persecution.)

What does that mean for us—this sibling rivalry thing? Paul says, it is the same now. For even the committed, those of us walking in grace, those of us seeking to serve and perhaps even lead, there will always be pressure from the Pharisee and Sadducee types. They want us to join their ranks, but we should not. They attempt to make us feel inferior with their legalism. They want us to feel inferior, out-of-step, politically incorrect, second-class.

But we should not give in to their traps. The traps includes the projection, “if we would but perform as the ‘religionists’ instruct, we would please God.” The problem is that the legalists are humanly determining how we should live out life—perhaps we should call legalism Abraham-Sarah Manipulation Philosophy (ASMP). God’s Word was left out of the equation.

When we live in God’s grace and mercy we learn what God has really done for us. It is just like God to expect that we would pass on what we have learned.

When God called me into ministry, I promised Him that I would give others what He has given me to pass on. Life is not so much about income as it is about outflow. Think on that! Ishmael should have!

Called to be Led and Live in a Secular Culture – Galatians 5:16