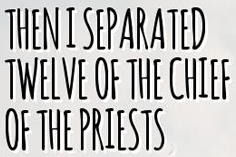 Ezra had an interesting dilemma; he was leading a group of Jews back to the holy land not without challenge. Estimates are that the treasure he carried amounted to over 30 tons and he had to travel a distance of more than 1000 miles. Along the way there were people of different ideas—bandits and those willing to do more evil than just rob. Have you ever felt that you were in a dilemma? If you were called upon to do a task, who might you rely upon? Dilemmas are not unusual; it is what we do with them that makes a difference.

Ezra picks twelve men. The Fed-Ex company had not yet started. Lloyds of London could not protect from the risk, because they did not exist. Perhaps he could sell the treasure and move the assets via his American Express; however, there did not seem to be any handy guarantees . . . none . . . zilch!

The character of these twelve men impressed Ezra. Contracts, sets of laws, rules, and policies do not guarantee compliance. It comes down to the character of a person. Reliability has always been that way.

Ezra chose consecrated men; men who were set apart. He chose men who were holy. These kind of men could be counted upon with their “I wills.” Their character pictured men who would also be unbendable; saying they “would not.” Of course this is not a “male thing,” because character is also sought in women.

Three qualities poured out of those Ezra chose:

Leadership, whether in the home, business, or behind the desks of the education institution is always better served by those going forward as set apart people.

Be diligent to present yourself approved to God as a workman who does not need to be ashamed, handling accurately the Word of truth . . .. If any person cleanses themselves from these things, they will be a vessel for honor, sanctified, useful to the Master, prepared for every good work. 2 Timothy 2:15, 21

Show me the path where I should walk, O Lord; point out the right road for me to follow. Lead me by your truth and teach me, for you are the God who saves me. All day long I put my hope in you. Psalm 25:4-5