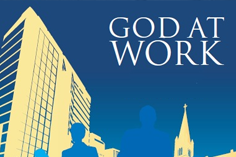 A popular advertisement of years gone by showed four guys sitting around in their fishing gear, high up in the mountains. They sit around a camp fire with their fish in a skillet and cans of beer in their hands.

One fisherman holds up his can and declares: “It just does not get any better than this!”

The advertisement would have the viewer believe that life is found with other “boys,” outdoors, on a weekend, with one’s favorite food and a can of beer. The reality is that life is not found in a cold can of beer or fish frying in the skillet.

Most of us are comfortable in our employment so long as it provides happiness and the means for a pleasant life. Our vocation becomes the hangout to make enough dollars so one can live in the proper life style, get all the respect we think we deserve, and not have any changes come our way that are uncomfortable. It is about us, not about our ministry of service! At the end of the work week, the cry of these folks is TGIF.

It was not so with the immigrants from Babylon in the fifth century B.C.  Their desire was to rebuild the Temple in Jerusalem (Zion). Their ministry included zeal . . . zest . . . and lots of zing.  In the next two chapters of Ezra, the Hebrew word that indicates speed of work is used in connection with their service.

The “gusto” they possessed to build a Temple to honor and give praise to God was focused.  It began in 538 B.C. and was completed fifty years later. 42,360 persons returned to build the Temple in Jerusalem; additionally, there were 7,337 slaves and a choir of 200—both men and women (Ezra 2:64).

In Washington D.C., a project was begun in 1907 to complete the Washington National Cathedral.  The Cathedral was completed in 1990. The builders stayed with the project—legions of sculptors, metalsmiths, masons, and stained-glass artists. They intended for the work to be completed.

How is your “gusto”? The ministry God has given you for education or business is not about you—it is about Him. How are you doing with it?

With the magic word in your heart, all things are possible, and without it all study is vanity and vexation. The miracles of life are with it; the blind see by touch, the deaf hear with eyes, the dumb speak with fingers. To the youth it brings hope, to the middle-aged confidence, to the aged repose. Not only has it been the touchstone of progress, but it is the measure of success in everyday life. The magic word is work.

It is interesting to contemplate the reward God gives for work.  A master had three servants charged with stewardship of his money. Two servants performed their duty without question; the third did not.  When the master returned to get a report of the servant stewardship, he pronounced the third servant as not of much worth as the servant had not worked in the best interest of the master. The master took the money entrusted to the servant and gave it to the one who was faithful—the reward was more work. Work is not a bad thing—it is a God word.