Only One King Left 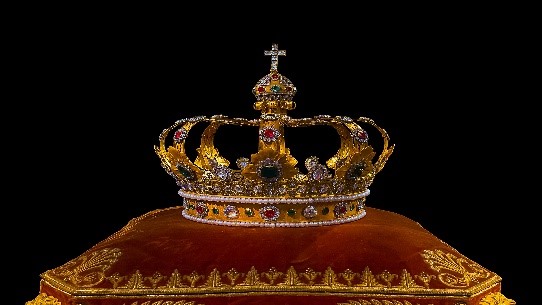 After this I looked, and behold, a door standing open in heaven! And the first voice, which I had heard speaking to me like a trumpet said . . .. –Revelation 4:1

Back in 1957, King Farouk, of Egypt, on the verge of losing his crown, made a gloomy prediction. “There will soon be only five kings left, He said, “The king of England, Diamonds, Hearts, Spades, and Clubs.

In reality, King Farouk, whose reign ended in a military coup, was too pessimistic. Monarchies still hold sway in a large number of countries around the world. Over 500 million people still bend their knees, or doff their hats, to Kings, queens, sultans, and sheiks. Sultan Hassanal Bolkiah of Brunei is still a monarch, ranked as the world’s most wealthy royal. He has a small home – a 1,788 room palace featuring a dome gilded in 22-carat gold.

All that is nothing compared to what John saw in heaven.

I do not know how many of you have traveled to foreign lands; my family has traveled to several countries. I have a friend that has traveled to Thailand, another who has traveled to Nepal. I am told how strange the visit is. Language, customs, dress, temples, architecture, and even the transportation is strange.

The things John observes are strange to him; yet, awesome, exotic, unexpected, and unique. Reading the chapter, it would seem that John was somewhat ill at ease.

The door is opened, the curtain is pulled back for a view of what is coming for those who will reside with our Great God. Twelve times the throne is mentioned. The One seated on the throne in verse three has the appearance of jasper and carnelian (sardis). Is that what God is like?

Around the throne are 24 elders and 4 beasts. Why 24 elders? In 1 Chronicles 24 we read about 24 elders appointed by King David to represent the entire Levitical priesthood. The priests were many thousands in number. They could not all come together at one time, but when the 24 elders met in the temple precincts in Jerusalem, the whole priestly house was represented.

Is the picture of 24 elders in heaven symbolic of the elders of King David’s time? Perhaps – we do not know, but we will know. What we do know is that the 24 elders of Revelation represent the redeemed of all time. All are priests; all worship. (Lehman Strauss)

We do know that the elders were there to worship Him (4:10). Then there were the four beasts (cherubim). One like a lion with strength, one like an ox for service, one like a man with a face of a man, and one like a flying eagle. The portraits of Jesus Christ in the four gospels cannot exactly escape us here.

We gather, also, from our passage that in heaven, there will be continual obeisance, reverence, homage, honor, and service.

Do you feel the tugging to join this host of elders and their company as they throw their crowns at the foot of the Throne, chanting: Worthy are you, our Lord and God, to receive glory and honor and power, for you created all things and by your will they existed and were created (Revelation 4:11).

Behold, Jesus is coming soon to take you home to Heaven; His words are faithful and true  Revelation 22:6

Life Application The opportunity to worship as we cast our crowns at the foot of the throne dare not escape us. It is a glorious opportunity to celebrate and honor the One who has brought salvation to an undeserving people – us. How are we handling our worship opportunities