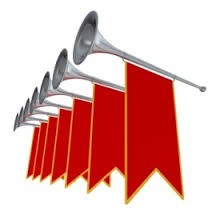 Now the seven angels who had the seven trumpets prepared to blow them –Revelation 8:6

The angels raise their trumpets. Something momentous is about to happen!

The narrative in the balance of chapter eight includes four of the trumpets. The last trumpet blast does not occur until late in our tenth chapter. There is much to take place. Every trumpet blast is destructive – affecting life as the world knows it.

Then in Revelation 8:13 there is a dire warning. Read it. The first four trumpet blasts are a drop in the bucket to what is in store for the people of the earth.

What is God doing in the first four trumpet judgments? He effectively shakes the foundations that people take for granted. The earth and its vegetation, the sea and its creatures, the ships and shipping lanes, the fresh water—that which people of the earth drink, and the celestial lights in the sky dim. All this forms a foundation for lives of people of the earth.

The judgments form a reality for earth-bound humanity – the One who stands behind foundations is the One who gave them to humanity. This One can simply command a trumpet be blown, and the One removes 1/3 of what humanity relies upon.

Humanity seeks to dismiss the absolute truth of a Holy God. Excused offered, other gods employed, and little acknowledgement of the reality of Almighty God is common.

So dramatic are the judgments, and so unmistakably an evidence of the power and sovereignty of God, that men on earth can no longer ignore the facts. God is dealing with humanity. Philosophy and warped theology dismiss a God of judgment. After all, religion teaches that God is simply a grace giving One. Catastrophic judgments – well, that is metaphors to get humanity’s attention. Yet the Word of God is plain; humanity must avail themselves of grace before it is too late, for judgment is coming.

For the wrath of God is revealed from Heaven against all ungodliness and unrighteousness of men, who by their unrighteousness suppress the truth. For what can be known about God is plain to them, because God has shown it to them. For His invisible attributes, namely, His eternal power and divine nature have been clearly perceived, ever since the creation of the world, in the things that have been made. So they are without excuse (Romans 1:18-20).

What humanity suppresses is not because they do not know. No one can suppress the unknown; one can only suppress the known. What we suppress is a choice (not always a good choice). It is what is common to humanity. What truth are you suppressing today? It is your choice. What you need to be concerned about is the outcome of your choices. “So they are without excuse.”